For Those About To Lead – We Salute You (Part Three) 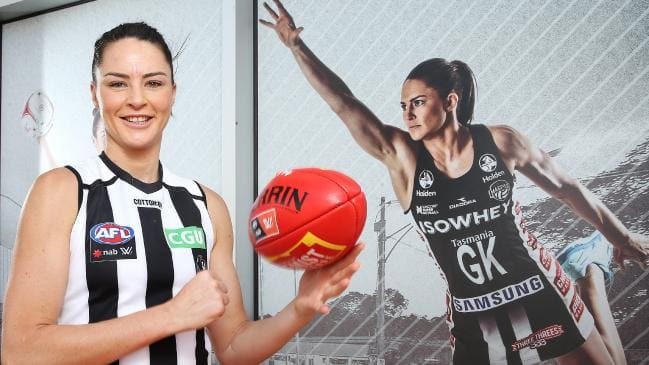 This blog series examines some universal qualities / traits of successful leadership, and pays respect to admirable leaders who exemplify on these fronts; there is something to learn from all of them.

Part three of the blog series is focussed on the highly desirable leadership quality / trait of vulnerability.

Like authenticity, vulnerability is another leadership trait that is often miss-understood; typically by being viewed incorrectly as weakness or oversharing.

From a leadership perspective, vulnerability can be as simple (but not as easy) as asking for help or admitting to your team that you don’t have all the answers.

Brene Brown is a leading expert in this field, and has written multiple excellent books; she defines vulnerability as: 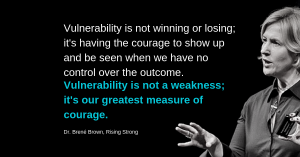 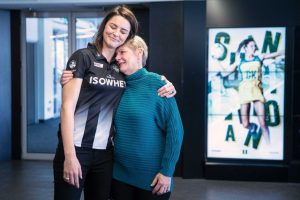 The touching picture above shows Sharni Layton with her mother Karen after announcing her retirement from professional netball in 2018.

She was renowned as a tough competitor on court, with a warm and friendly demeanour off it.

During her decorated netball career, she made the courageous decision at one point to take a six-month break to overcome mental health challenges.

It was a true sign of vulnerability as a leader, and one that no doubt gave strength to others to overcome their own challenges with mental health.

Since calling time on her netball career, Sharni Layton has gone on to play in the AFLW competition, become an ambassador for many great causes and remain a strong leadership role model. 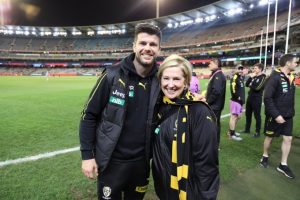 Following a disappointing season in 2016, the Richmond Tigers have since gone on to win the AFL premiership twice; an awesome achievment.

Vulnerability, and the work of Brene Brown, pictured above at a tiger’s home game in 2019, have been credited as a key part of the club’s success.

Their “triple h” sessions where once a fortnight a player stands up and shares three highly personal stories about a hero, hardship and highlight, all in front of their teammates, is a strong example of vulnerability.

These sessions often ended in tears, hugs and applause; but ultimately, they created a “brotherhood” that became so much closer than a team ever could, and this was leveraged for competitive advantage.

The strength of this brotherhood was on full show in early 2019 when star player Dustin Martin opened up about his own mental health struggles. He would go on later that year to win his second Norm Smith medal in their premiership winning side.

The team also credits The Resilience Project and its focus on Gratitude, Empathy & Mindfulness (GEM) for their success.

Like the work of Brene Brown, this book by Hugh van Cuylenburg should also be on the must-read list for any existing or aspiring leader. 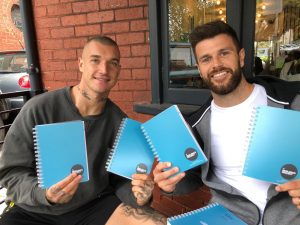